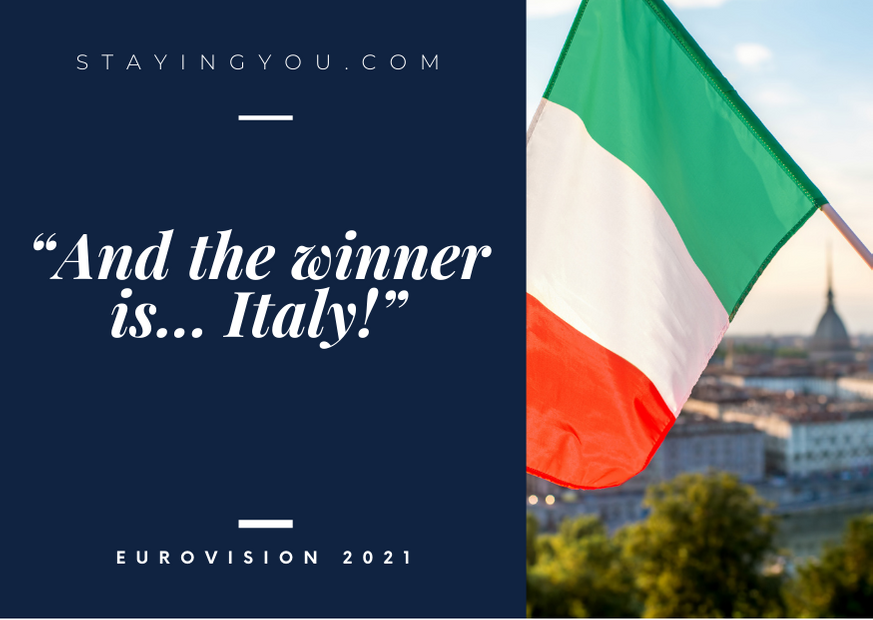 And the twelve points go to….

Saturday night, millions of people sat glued to their TV watching Eurovision Song Contest 2021, the 65th edition.
2020 marked the first time the Contest had to be cancelled in 64 years because of the spread of COVID-19 throughout Europe.
After all the contestants have sung their song, a jury of five music industry professionals from each participating country give points of 1 to 8, 10 and 12 points.
The “professionals” put Switzerland and France on top of the chart. Each with a French song.
The public decided otherwise… after the second round of voting Italy came out as the winner of the Eurovision Song Contest 2021.

Even though the Eurovision Song Contest took place 64 times, it has 67 winners. In 1969, 4 countries topped the scoreboard with an equal amount of points; the United Kingdom, Spain, the Netherlands and France. Lacking rules to resolve tie situations, the EBU had to declare all 4 contestants as the winner. Thank goodness — tie rules were introduced shortly after.
2020 marked the first time the Contest had to be cancelled in 64 years. Uncertainty created by the spread of COVID-19 throughout Europe — and the restrictions put in place by the governments of the participating broadcasters and Dutch authorities — meant the live event could not continue as planned. The health of artists, staff, fans and visitors from Europe and the world was at the heart of the decision.
In 2015, the Guinness Book of World Records recognised the Eurovision Song Contest as the Longest Running Annual TV Music Competition.
ABBA is the most successful Eurovision Song Contest winner. The Swedish pop band won the contest in 1974 and has enjoyed phenomenal success ever since, despite officially splitting up in 1983.
The most covered Eurovision Song Contest song is Domenico Mudugno‘s Nel Blu Di Pinto Di Blu, also known as Volare. Famous stars have covered the song such as Dean Martin, Cliff Richard, David Bowie and many more.
Domenico Mudugno performing Nel Blu Di Pinto Di Blu, also known as Volare, in 1958.
Johnny Logan won the Eurovision Song Contest 3 times. In 1980 and 1987 he represented Ireland as performer and won both times, with Hold Me Now and What’s Another Year, in 1992 he wrote Linda Martin’s winning entry Why Me?
In 2014, Valentina Monetta took part for San Marino for the third time in a row and… qualified for the Grand Final! She took part in the 2017 contest for the fourth time!
in 2011, Lena, the winner of the 2010 Eurovision Song Contest, defended her title on home ground — something only 2 people have done in the contest’s history.
Until 1998, a live orchestra supported each act, and every country brought its own conductor. Noel Kelehan conducted the orchestra of 5 winners, in 1980, 1987, 1992, 1993 and 1996. Dutch conductor Dolf van der Linde conducting for a record 7 countries; Belgium, Germany, Ireland, Luxembourg, the Netherlands, Sweden and Switzerland.
Only 3 women conducted the orchestra at the Eurovision Song Contest. Nurit Nirsch conducted the Israeli entries of 1973 and 1978, Monica Dominique conducted the Swedish 1973 entry and Anita Kerr appeared in front of the orchestra for Switzerland in 1985.
German songwriter and composer Ralph Siegel is a true Eurovision addict. He took part in a whopping 21 times. He did so most recently in 2014, granting San Marino their first qualification to the Grand Final. His 22nd participation was in 2017, having written the song for San Marino. He won once, in 1982, with the famous Ein Bißchen Frieden. (source: Eurovision Song Contest)

“The slogan ‘Open Up’ is intentionally incomplete: Open up to each other. Open up to music. Open up to Rotterdam. Open up to… whatever you choose! Feel the freedom to complete the slogan in your own way. That way we get to know each other better,” says Sietse Bakker, Executive Producer Event of the Eurovision Song Contest” — (Eurovision Song Contest)
Everyone agreed upon the top quality of the songs this year, and it would not be easy to determine a winner.
The bookmakers were right, giving the odds of winning this contest to Italy.
This rock song surely counts as an “open up”!

Will this be the start to a new era of a pandemic free world?